Iconography: The Image of Christ in the Dome

THE IMAGE OF CHRIST IN THE DOME 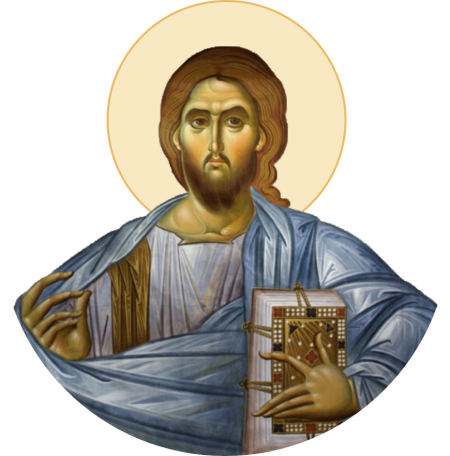 After the period of Iconoclasm (ending in 843), Byzantine ecclesiastical architecture emerged most characteristically as a centralized plan surmounted by a prominent dome at its core. It continues as the most common scheme for an Orthodox church today. This form of architectural plan readily serves to reflect the hierarchical system of the Orthodox Faith and its visual expression, whereby the dome, the highest point within the church structure, became associated with heaven and thereby was reserved for the depiction of the holiest figure, Christ Himself. This has become the definitive image of the interior space of Orthodox churches.

The depiction of Christ that eventually became the standard image for the dome is that of a bust figure where the Lord is shown blessing with His right hand and holding the Gospel Book in His left, often encircled by a rainbow pattern. It is a particularly ideal rendering for a dome decoration-as if Christ were looking down from the heavenly realm on to the earth below. Byzantine writers, such as the 9th-century, sainted patriarch Photios, referred to such images as the Creator overseeing the earth and its orderly arrangement and revealing His care for us. Later, Nicholas Mesarites, a churchman who later became the Metropolitan of Ephesos, when writing his description of the mosaics of the church of the Holy Apostles in Constantinople at the end of the twelfth century, refers to Christ’s image in the dome as He who looks through the lattice (the rainbow) in the manner of an ardent lover (paraphrasing Song of Songs 2:9), that is, as the One who loves His human creation, the Philanthropos.

Although such images of Christ were not inscribed themselves with the epithet Pantokrator until the twelfth century, the term was associated with such images from the ninth century onwards. The term Pantokrator itself is found in the Scriptures, in both the Old and New Testaments (for example 2 Samuel 5:10; 1 Chronicles 29:12; and in several verses of the Book of Revelation, among which are 1:8, 4:8 and 21:22) where it is usually translated as “Almighty” but could be rendered also as “All-Governing” or “He Who Holds All Things in His Hands.” It is also employed in the Creed: “I believe in one God, the Father Almighty….”

For us believers who enter the church building and turn our gaze upwards to behold the Christ Pantokrator, the image is ultimately a transformative image, as scholars have noted. Beneath this image is where the Divine Liturgy is celebrated and it is directly beneath this image the faithful receive the Holy Eucharist-the very Body and Blood of the same Lord Jesus Christ, the Pantokrator. The liturgical celebrations and the Sacrament of the Eucharist unite us with Christ in the image directly above. They transform us to identify, in the most intimately means possible while on earth, with the Lord above. Liturgical commentators, such as Saint Maximos the Confessor (6th-7th century), and Nicholas Kabasilas (14th century), describe how when one receives the Body and Blood of Christ, one resembles and is transformed into Him.

The dome, and its image of Christ Pantokrator, is therefore a liminal zone, a transitional, sacred space between the celestial and the earthly. Directly beneath His image, the believer enters a performative space, that is, he or she participates in and engages with the mystical liturgical actions, actions that culminate in the faithful’s reception of the Lord’s Sacred Body and Blood, in order to be intimately transformed and held within the hands of the Christ Pantokrator directly above.