Iconography: The Titular Icon of Saint Nicholas in the Shrine at Ground Zero 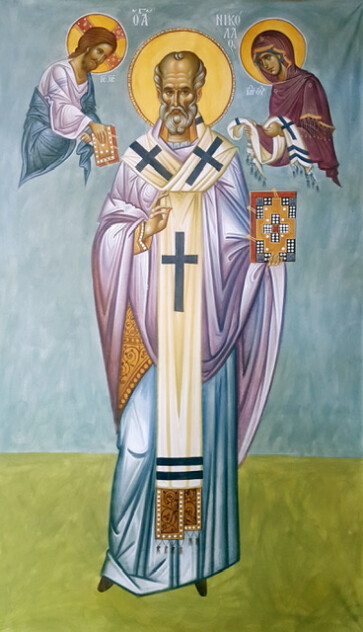 Upon entering the narthex of the Shrine of Saint Nicholas at Ground Zero, one will find a large, full-length icon of Saint Nicholas to the right of the doors leading into the nave. The Holy Hierarch’s large image appropriately appears in the narthex as the patronal Saint of the Shrine. His holy presence is immediately encountered by all faithful and visitors who enter this sacred space.

In the icon, Saint Nicholas appears in his episcopal vestments: the omophorion (the long scarf-like cloth) worn over the shoulders, with one end hanging down the front and one in the back, decorated with large crosses; and blessing with his right hand and holding the book of the Gospels with his left. The omophorion derives its name from the Greek word omos (shoulder), indicating this piece of liturgical garb is worn “on the shoulder” (omophorion). It corresponds to the western liturgical garment of the pallium. Traditionally, the omophorion was made of wool, symbolizing the fleece of the lost sheep that Christ as the Good Shepherd (Luke 15:1-3 and John 10:1-21), raises on His shoulders, returning it to the flock. The omophorion, as symbol and metaphor, links any bishop to Christ, as a good shepherd caring for his flock of the faithful. Visual representations of the Christian Good Shepherd appear as early as the third century, in the catacombs of Rome. The Christian image itself derives from the classical Greek figure of the kriophoros (the ram-bearer), symbolizing the sacrifice of a ram. The Gospel Book held by Saint Nicholas represents Christ Himself and His saving message, which guarantee the Holy Hierarch’s teaching authority as guardian of the Faith.

Flanking Saint Nicholas at the shoulders are bust images of Christ and the Theotokos. Each is presenting to Saint Nicholas the attributes of his episcopal office: the Gospel book given by the Lord and the omophorion by the Mother of God. The icon visualizes an episode recounted in the Life or Vita of the Saint: before becoming a bishop, Saint Nicholas had a dream in which Christ and the Virgin both appeared to him and bestowed upon him the episcopal insignia- the omophorion and the Gospel book. This iconography is also associated with another event in the Life of the Saint: when according to Tradition, Saint Nicholas was among the hierarchs participating in the First Ecumenical Synod in Nicaea at which the doctrine of the heretic Arius was condemned. Arius had persisted in teaching that Christ the Son was not equal in divinity to God the Father and due to Arius’ arrogant persistence, Saint Nicholas slapped him. In response to this action, the other hierarchs present reproved Saint Nicholas and had his episcopal insignia taken away. Later, Christ and the Virgin again appeared to him and restored to him the emblems of his hierarchical rank, thus demonstrating the correctness of the Saint’s heroic defense of the Faith.

The depiction of Saint Nicholas, either as a full-length figure or in a bust form, flanked by the busts of Christ and the Virgin, is the standard rendering of this saintly bishop’s icon-portrait, whether for a portable icon-panel or a wall-painting. As scholarly research has shown, the earliest surviving examples of this iconography are from the eleventh century although textual evidence indicates that it may be as old as the ninth century. And as scholarly investigation has also noted, such iconography is unique among depictions of saintly hierarchs. Only Saint Nicholas is rendered receiving his episcopal insignia directly form Christ and the Theotokos, visually emphasizing his particular importance, uniqueness and the great veneration and devotion he is accorded among the Church’s Holy Hierarchs.

This full-length and prominent icon located in the narthex of the Shrine follows similar depictions of those found in other Byzantine churches, such as two 12th-century examples: that in the church of Saint Nicholas of the Roof in Kakopetria, Cyprus and that in the church of Saint Nicholas Kasnitzes in Kastoria, Greece. Both of these earlier icons are large and placed in prominent positions within those edifices so that the patron Saint of these churches, as also in the case of our Shrine, is prominently revealed and directly encountered in prayerful dialogue with all those who seek his powerful intercessions and offer to the Holy Hierarch their prayers of thanksgiving.