Iconography: The Images of the Deesis in the Shrine of Saint Nicholas at Ground Zero

In the conch of the curved surface of the semihemisphere or quarter-sphere extending into the narthex from the nave of the Shrine of Saint Nicholas at Ground Zero, there is the image of the Deesis: in this example composed of the central half-length image of Christ, flanked by half-length images of the Mother of God and Saint Nicholas, both of whom extend their hands towards Christ in a prayerful, reverential gesture. The technical term Deesis(transliterated from the Greek word δέησις-meaning entreaty or intercession or intercessory prayer) has most often been applied to the sacred image of Christ flanked by His Mother (to His right) and Saint John the Baptist, the Forerunner or Prodromos (to His left), the most well-known example being that of the monumental 13th-century mosaic in the south gallery of Hagia Sophia in Constantinople. The Virgin and Saint John the Baptist are regarded as the most powerful of intercessors before the Lord on behalf of humanity due to their special relationship to Christ: both are related to Christ according to the flesh; the Virgin as the Lord’s Mother and vehicle of the Incarnation, has a unique closeness to Him and possessed the motherly boldness, or parresia (παρρησία) to use the Byzantine term, to approach her Son to intercede on our behalf; while Saint John, a cousin of the Lord, was the last of the prophets and the Forerunner who prepared the way of the Lord, and about whom Christ Himself referred to as the greatest born of woman (Matthew 11:11 and Luke 7:28). Both the Virgin and Saint John the Baptist were witnesses to His Divinity. Versions of this iconographic type appear as early as the 9th century, if not before. 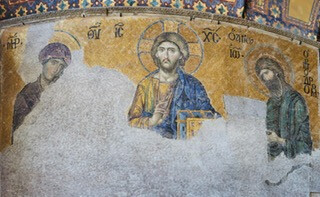 As scholars have shown, from within the Byzantine/Orthodox Tradition, however, the composition of the group of figures we commonly refer to as a Deesiswas not static and a variety of different holy figures and the number of such figures could be employed to create the image of intercession or supplication. Numerous examples can be found in a variety of media across many centuries that testify to the mutability of the so-called Deesis image. This variability of course would depend on the context of the image and the desires of the patron or donors of such images. In the case of our image in the Shrine at Ground Zero, the figure of Saint Nicholas, the Patron Saint of the Shrine, appears at Christ’s left instead of the Forerunner. Our example is inspired by the mid-16thcentury Deesis in the Athonite monastery of Stavronikita, painted by the celebrated iconographer Theophanes the Cretan, where it is located above the entrance into nave. The main church of the Stavronikita monastery is also dedicated to Saint Nicholas.

The open Gospel Book held by Christ displays the combination of two verses from Saint John’s Gospel: 20:19 and 8:12, in translation, “Peace be with you” and “I am the light of world.” This is the same composite Johannine text that appears in the Gospel Book held by Christ in the narthex mosaic of Hagia Sophia. Scholars have remarked that in the Byzantine period, this is the only known visual example of this combination of the two verses from the Gospel of John. This textual detail in our icon further reinforces the Shrine’s allusion to Hagia Sophia in Constantinople which served as one of the architectural inspirations for Saint Nicholas at Ground Zero. And as noted in an earlier newsletter in this series, Hagia Sophia had a chapel dedicated to Saint Nicholas at the eastern end of the edifice, which served as a locus of sanctuary, refuge and asylum while also housing a miraculous icon of Saint Nicholas. This text of Saint John’s Gospel reminds us of the Lord’s message of peace and that He is the Light that illumines us, a great message of hope and comfort that consoles all who visit this sacred space that commemorates the tragic loss of life on 9/11.

As was also outlined in a previous newsletter of the Shrine, within the centuries-long Byzantine/Orthodox Tradition, Saint Nicholas was, and is, regarded as one of the most popular saints, venerated for his great intercessory powers, especially remembered as a holy figure who rescues individuals from dangers and as a great intercessor at tribunals for those who were wrongly condemned. Thus, as scholars have shown, in light of the latter role, he is regarded as a most powerful intercessor for the dead at the Last Judgment. Keeping all these traditions in mind, it is most appropriate, therefore, that this monumental image of the Deesis with Saint Nicholas is encountered by the faithful and visitors when about to exit the Shrine. All are reminded of this Saint’s great intercessory power, along with that of the Mother of God, before the Lord, on our behalf, the living, and on behalf of the dead, especially those who tragically lost their lives on the horrific day of 9/11.