Iconography: The Image of the Patron of Orthodoxy

On 2 November, the Thirtieth Anniversary of His Enthonement on the See of the First Called Disciple Saint Andrew in Constantinople, which is the Feast of Saint Elpidophoros the Martyr, His All-Holiness Ecumenical Patriarch Bartholomew presided over the Thyranoixia service for the Shrine of Saint Nicholas at Ground Zero and the raising of the permanent Cross installed on the apex of the dome. This ceremony of initiation, led by the Spiritual Leader of world-wide Orthodoxy, marked a significant and sacred moment of entry into the Shrine in preparation for its future, full liturgical use and place of pilgrimage.

For a traditional Orthodox church building, the point of entry and initiation is the narthex. It is the liminal, or transitional zone, where one steps from the outside world in order to prepare and reflect, before entering into the nave. Traditionally, a narthex contained special iconographic programs that reflected the church’s particular saintly, patronal dedication, or the donor’s interests or role, or various, non-Eucharistic liturgical rites or ceremonies that occurred in such spaces.

Given the special presence and presiding role of His All-Holiness in the Thyranoixia service, it is most appropriate that this historic event be memorialized visually and be incorporated within the iconographic program of the Shrine in keeping with the long-standing pictorial repertoire of the Byzantine/Orthodox Church. Thus, one of the images to be found in the narthex of the Shrine is that of His All-Holiness Ecumenical Patriarch Bartholomew presenting a model of the Shrine to Saint Nicholas. Such presentation/offertory imagery has a centuries-long history within the Byzantine/Orthodox iconographic tradition and can be found in various media. Three very well-known mosaic examples are: the 6th-centry apse in the church of San Vitale, Ravenna, depicting Bishop Eccelsius (under whose episcopacy construction of the edifice began) offering a model of the church to Christ; the 10th-century in the southwest vestibule of Hagia Sophia depicting the saintly emperors Constantine I and Justinian I offering models of the City of Constantinople and of Hagia Sophia to an enthroned Theotokos and Christ Child; and that of the 14th-century in the inner narthex of the church of the Chora in Constantinople showing Theodore Metochites, a Byzantine statesman who restored and provided for the Chora’s decoration, offering a model of the church to Christ, the namesake of the church.

Such scenes of offering were created to visualize a variety of complex desires of the patron/donor/offeror in dialogue with the Divine or Sacred Figure: praying for the remission of sins; seeking divine favor or blessing; presenting a thank-offering as an answer to a prayer; fulfilling some kind of vow; or for invoking the Lord’s mercy for salvation in the afterlife. These types of images present a liminal zone where earthly and heavenly realms meet. They express the most intimate dialogue between the human and the sacred.

In our example, the image of the Ecumenical Patriarch embodies all the Orthodox as a Patron or Prayerful Supplicant. On behalf of all the faithful-clergy and people, His All-Holiness Ecumenical Patriarch Bartholomew presents our international Shrine to Saint Nicholas who is the Heavenly Patron of this Shrine. In the Orthodox world, Saint Nicholas is regarded as one of the most powerful intercessors, especially for the dead at the Last Judgment. The Ecumenical Patriarch represents all who call upon this great Saint’s intercessions, where those who tragically lost their lives are perpetually remembered, and where we the living are comforted and find hope for our salvation as well. 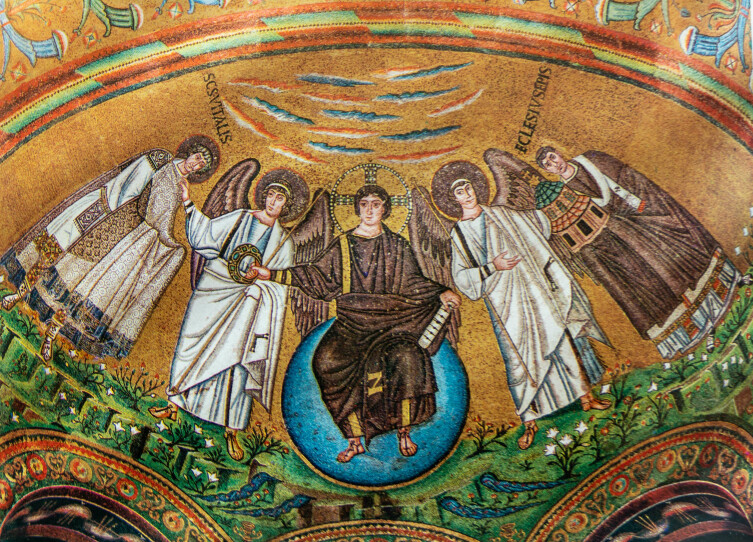 10th-century mosaic, southwest vestibule of Hagia Sophia, depicting the saintly emperors Constantine I and Justinian I offering models of the City of Constantinople and of Hagia Sophia to an enthroned Theotokos and Christ Child: 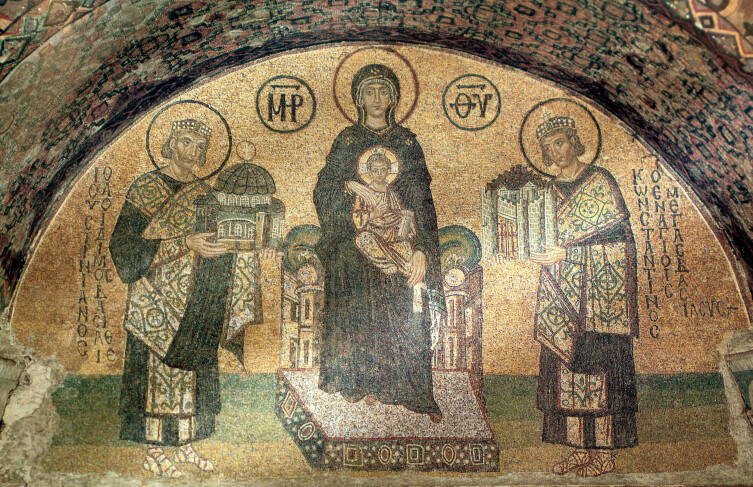 14th-century mosaic, inner narthex of the church of the Chora in Constantinople, showing Theodore Metochites, offering a model of the church to Christ: 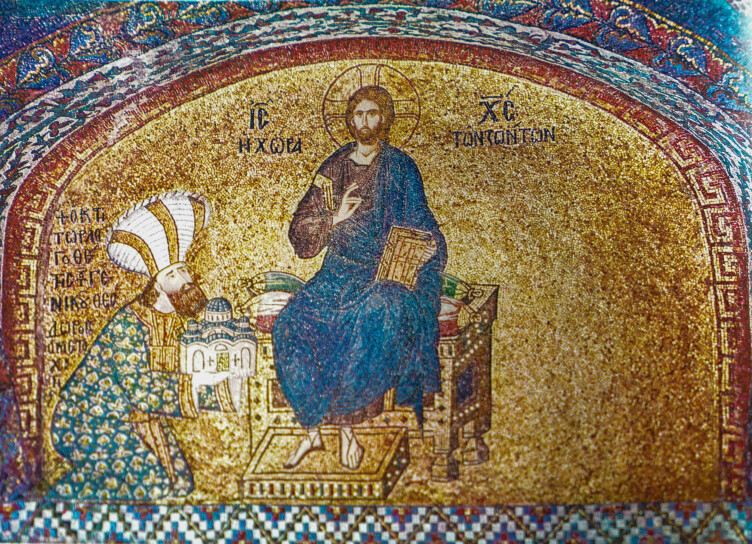 His All-Holiness Ecumenical Patriarch Bartholomew presenting a model of the Shrine to Saint Nicholas (narthex image): 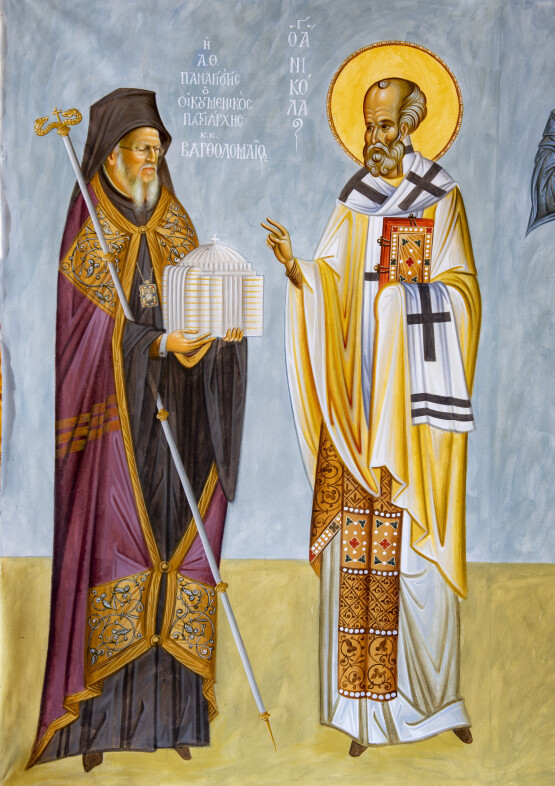