Iconography: The Image of the Mother of God as Protectress of New York City 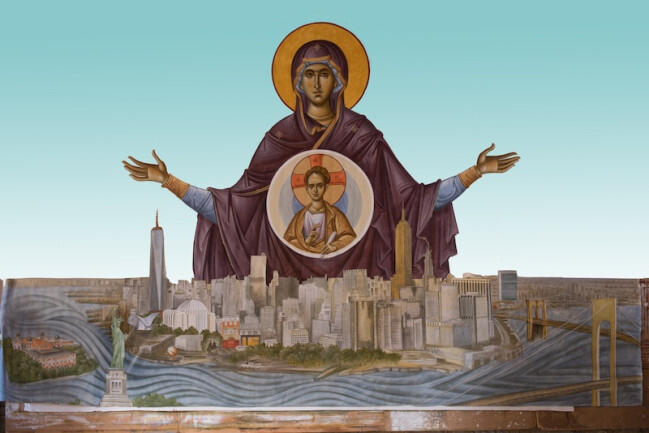 In Byzantine/Orthodox churches of a centralized, domed plan, some type of image of the Mother of God is usually placed in the conch of the apse of the sanctuary wall. This is also the case for that of the Shrine of Saint Nicholas at Ground Zero. As early as the eighth century, the sainted patriarch Germanos I, when writing in his Commentary on the Divine Liturgy (Historia Ekklesiastika), understood the conch of the apse to symbolize the cave of Bethlehem where Christ was born and that below it is the altar table on which Christ’s Body, the Heavenly Bread, is present. As the vehicle of the Incarnation, in which Christ receives His Human Flesh from His Mother, it is most appropriate that her image is accorded a prominent place in the sanctuary.

The image of the Theotokos in the Shrine of Saint Nicholas is one in which the Virgin is shown with her arms raised at her side, a gesture of intercessory prayer (orans), with a medallion of the bust of the Christ Child before her. This Marian iconographic type first appeared in the middle years of the 11th century and quickly became one of the most popular images of the Theotokos, especially adapted for the curved space of an apse. It is referred to by various names: the Blachernitissa (associated with one of the celebrated icons of the Virgin at the most famous Marian church in Constantinople-the Blachernai); the Platytera (She Who is Wider than the Heavens-a phrase found in the Liturgy of Saint Basil, since she bore God within Her); the Episkepsis (variously understood as the Visitation-either to a sacred image of the Virgin at Blachernai or to the weekly Friday evening miraculous event at which the Holy Spirit descended upon an icon of the Virgin at Blachernai, or as an epithet conveying the Virgin’s role as Shelter or Protection). In the Slavic world, the image of the Virgin orans with the medallion of the Christ Child before her is known as the Virgin of the Sign (Znamenie), recalling the prophesy of Isaiah 7:14 “The Lord Himself shall give you a sign, a virgin shall conceive…”

Such an image of the Theotokos and Christ Child is the bold visual expression of the Church’s doctrine of the moment of the Incarnation: the divine, pre-ternal Logos, seen here as the Christ Child, encircled within His medallion of sacred light, is placed before the breast of His Mother, from whom He takes on human flesh. The Virgin’s maphorion or veil is also a metaphor for covering Christ’s divinity with her flesh, the same flesh of the Eucharist celebrated on the altar below this image.

The Theotokos’ raised arms in intercessory prayer, with the extended folds of her maphorion spread out as a protective sign, has a long association with the church of the Virgin of Blachernai in Constantinople. It was in this church that the relic of the Virgin’s mantle (maphorion) was kept and according to tradition, the maphorion was carried in procession around the walls of the city during the Avar siege of 626, and again by Saint Photios the Patriarch during the attack of the Rus in 860. And now the image of the Panagia in the apse of the Shrine of Saint Nicholas is called upon to spread open her protective mantle and safeguard the city of New York, a city that had been so devastatingly attacked on the tragic day of 9/11.

Numerous architectural details and elements within the cityscape beneath the image of the Theotokos and Christ Child reinforce this site-specific and topographic connection between the visual prayer of the Shrine’s apse image and the history of New York city: the architectural skyline of Manhattan with its iconic buildings, and especially those new and surviving structures adjacent to Ground Zero, grouped together towards the lower left of the icon: the One World Trade Center Tower; the avian shaped World Trade Center Transportation Hub; the new Shrine of Saint Nicholas itself; the Liberty Park Sphere; the America’s First Response Equestrian Monument; the Firehouse 10 at Liberty and Greenwich Streets; and the Essex World Cafe, owned by the Costalas family, that served as a trauma and triage center in the days following the horrific attacks on the World Trade Center.

Such iconography as the Mother of God, with her Son placed before her, with arms outstretched in intercessory prayer and extending her protective mantel over a specific city has been employed within Orthodox contexts in the past. One of the closest parallel examples is that found in the apse of the great church of Saint Andrew in Patras, Greece (interior painting 1989-1992), where the icon depicts a similar type of the Theotokos and Christ Child placed above an architecturally recognizable cityscape of Patras (https://cosmosphilly.com/the-spectacular-beauty-of-byzantine-art-saint-andrews-church-in-patra/). The iconographer was Ioannis Karousas, who had studied Byzantine art under the renowned 20th-century iconographer Fotis Kontoglou. A very similar image is also employed for the home-page of the website for the Metropolis of Phthiotis in Lamia, Greece, where the Virgin orans with a medallion of the Christ Child before her breast hovers above the easily identifiable cityscape of Lamia (https://imfth.gr/).

This brief overview of the Shrine’s image for the conch of the apse reveals the profound and complex meanings and history associated with it. Such an image clearly proclaims the Church’s doctrine of the Incarnation of the Second Person of the Trinity; the iconographic type of the orans Mother of God with the medallion of the Christ Child before her has a centuries-long association with miraculous icons enshrined in the most celebrated Marian church in Constantinople-the Theotokos Blachernai, in which also the Panagia’s relic of her maphorion was kept, the maphorian that protected the Queen of Cities. With the Mother of God’s arms extended in intercessory prayer and her mantle spread out over the city of New York, we are reminded how she embraces us and prays on behalf of the city, of all who come as worshippers and pilgrims to the Shrine, and also for those who lost their lives at Ground Zero on the horrific day of 9/11.