Iconography: The Image of the Anastasis in the Shrine of Saint Nicholas

The Image of the Anastasis in the Shrine of Saint Nicholas 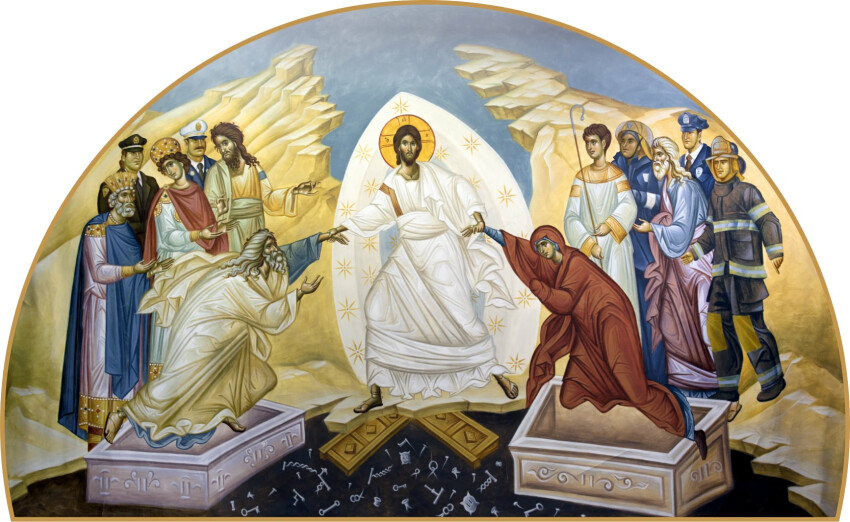 The image of the Anastasis (the Resurrection) is one of the essential images within the Byzantine/Orthodox Christological cycle found in all media. It is simultaneously both a simple and richly complex image, revealing the dramatic miracle of Christ’s resurrection from the dead and profound theological doctrines. The term is taken from the active and middle forms of the Greek verb: ἀνίστημι-anistemi (to rise up; to raise up) and ἀνίσταμαι-anistamai (standing or rising up). Both meanings apply to the events depicted in the icon: Christ rises from the dead by His own agency; Christ raises the dead to enter eternal life.

The earliest images referring to Christ’s resurrection from the dead are oblique references: the scene of the Myrrhbearing Women at the Empty Tomb (the Myrophoroi-appearing as early as the third century); that of Christ greeting the Marys after the Resurrection, known as the Chairete (at least since the sixth century); and the Incredulity of Saint Thomas (at least since the sixth century). The earliest known images of the Anastasis itself, however, are from the early years of the eighth century. As scholars have shown, this newer image of the Resurrection became the pictorial parallel to the theological debates of the seventh century (see endnote for details).

After the defeat of Iconoclasm (843), the image of the Anastasis eventually become the sacred image associated with the celebration of Easter. It was integral to the images of the Christological cycle. It eventually became the image accompanying the text of Saint John’s Gospel in illustrated lectionaries that was read for the Paschal vigil liturgy and the emblem of the triumphal paschal labarum or banner carried in the liturgical processions of Easter. In sum, the Anastasis becomes the festal image of Pascha.

In the Shrine’s image of the Anastasis, one finds at the center Christ, dressed in the dazzling white garments and the mandorla of light behind Him-attributes and details indicating His divinity. He has descended into Hades and is actively striding to raise up Adam and Eve, the ancestors of our human race, from their sarcophagi while He crushes beneath His feet the gates of Hades and destroys the locks, keys, bolts and chains that held the souls prisoners. The central portion of this image clearly recalls that of the famed fourteenth-century Anastasis image in the funerary chapel of the monastic church of the Chora in Constantinople.

At Christ’s immediate right is the figure of Saint John the Prodromos (Forerunner), who, according to homiletical texts and early Christian literature, preached Christ’s coming to those in the underworld. He is depicted gesturing to Christ as in images where Saint John is proclaiming Christ to be the sacrificial Lamb of God-the Lamb of the Eucharist. Also on the Lord’s right are the Holy Prophet-Kings, David (bearded) and his son, Solomon (beardless), whose presence testify to Christ’s royal and prophetic lineage from the House of David, thereby visually proclaiming the reality of the Christ’s Incarnation, the same lineage as that of the Theotokos.

To Christ’s left stands the youthful Abel, with his shepherd’s staff, the first human to die. Abel was also a slaughtered innocent and therefore he is understood as a prefiguration of the sacrifice of the death of the innocent Christ. Next to Abel is an elder, representing the righteous of the Old Testament dispensation who will be saved.

The topography of Hades has also been shown by scholars to convey theological significance. The landscape is split open for the saved to pass through, just as Moses had led the Israelites through the waters of the Red Sea. The geological setting also recalls that of the scene of Baptism, an allusion reinforced by the presence of Saint John the Baptist among the resurrected. Thus a sacramental aspect is likewise ascribed to the Anastasis image.

There are historical precedents for incorporating depictions of historical or contemporary figures within Byzantine sacred images (see endnote for examples). The inclusion of the figures representing rescue-workers who lost their lives on the tragic day of 9/11 in the Anastasis image of the Shrine of Saint Nicholas links the site-specific events of an historical moment to our ongoing hope for salvation and participation in the Resurrection of Christ and the blessing of eternal life with Him. This is the hope for those who sacrificed their lives for others as well as for us the living faithful. From the icon of the Anastasis, Christ gazes out towards us and we see our own rebirth in Him.

1 The Sixth Ecumenical Synod of 680-681 in Constantinople was concerned with defining Christ’s two natures - divine and human, complete with a divine and human will, which focused much attention on the theology of the death and entombment of the Lord; the Constantinopolitan Council of Trullo (referring to the domed hall of the imperial palace) of 691-692, which issued canons stipulating the use of images of Christ in the flesh instead of symbols like the Lamb, and canons that extend the celebration of Easter for the entirety of Bright Week; and the text of the Hodegos (Guidebook) of Anastasios of Sinai (written in the late 680s) which is a theological work emphasizing the two natures, wills and energies of Christ, focusing on His death, entombment, descent into Hades, and Resurrection. This latter text stressed the use of images to elucidate these definitions of the faith and their role in defending Orthodox doctrines. In addition, it has also been shown that in the seventh century there was a growing interest in the apocryphal, homiletical and hymnological literature dealing with the subjects of Christ’s death, burial and the defeat of Hades. This material, and the broader 7th-century context, is thoroughly discussed in Anna D. Kartsonis, Anastasis: The Making of an Image (Princeton1986).

2 In the illuminated manuscript known as the Menologion of Basil II, made around the year 1000, there are two images of liturgical commemorations of earthquakes: one which occurred on 26 October of 740, showing a clergyman leading a procession: https://digi.vatlib.it/view/MSS_Vat.gr.1613/0164?sid=a7590df9b8aca22111c8359533716419&zoomlevel=4); and for 26 January, in which an image shows the liturgical procession commemorating an earthquake of 450 in which the emperor and patriarch are the central figures:(https://digi.vatlib.it/view/MSS_Vat.gr.1613/0372). There is the example of the late eleventh-century Byzantine gospel book, produced at the famous Stoudios monastery in Constantinople (but now in Paris), that has an image of the Last Judgement at the corresponding point for Saint Mark’s Gospel. Within this miniature is the contemporary figure of the abbot with several of his monks placed beside the Virgin in Paradise: (https://gallica.bnf.fr/ark:/12148/btv1b10722121j/f189.item ). Among the late twelfth-century frescoes of the Enkleistra of Saint Neophytos in Paphos, Cyprus, there is the image of the Ascension which includes a depiction of the abbot, Saint Neophytos, being lifted up by two angels, an image commissioned while he was still alive: (https://www.gettyimages.ie/detail/photo/fresco-painting-of-angels-and-a-saint-in-the-ayios-royalty-free-image/520666042?adppopup=true ). In addition, there is the late fourteenth-century icon, now at the monastery of the Transfiguration in Meteora, Greece, depicting the scene of the Incredulity of Saint Thomas. Within this scene are the figures of the patrons of the icon, Maria Angelina Doukaina Palaiologina and her husband, Thomas Preljubović, standing behind Saint Thomas and blessed by the risen Christ: (http://www.hellenicaworld.com/Greece/Icons/en/TheIncredulityOfSaintThomas.html).