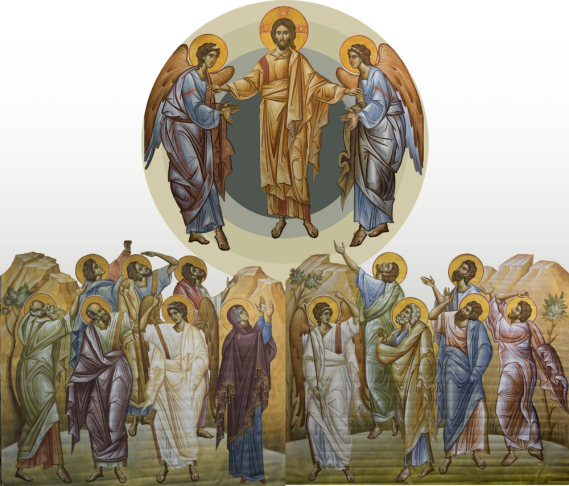 Among the images of the Christological cycle that will appear in the Shrine of Saint Nicholas is that of the Ascension (ἡ Ἀνάληψις), depicting Christ’s ascent into Heaven on the 40th day after His Resurrection. The biblical event is recorded in the Gospels of Mark (16:19) and Luke (24:50-53) and in the Book of Acts (1:9-12). In these Scriptures, one reads how, after further instructing the Disciples and telling them that the Father will send them the Holy Spirit, the Lord led them out as far as Bethany, to the Mount of Olives, and while He was blessing them He ascended into Heaven.

The Shrine’s Ascension image closely follows the account found in the Book of Acts: Christ, flanked by two Angels, is shown ascending, encircled in a cloud of divine light, and bestowing his blessing. Below are two groups of figures which include two Angels pointing upward and addressing Christ’s followers, “Men of Galilee, why do you stand looking into Heaven? This Jesus, who was taken up from you into Heaven, will come in the same way as you saw Him go into Heaven” (Acts 1:11). Among the figures appearing on Christ’s right, is that of His Mother, the Theotokos. She is depicted with her arms raised in intercessory prayer toward her Son on our behalf. Her presence is included since she is named among Christ’s followers who, immediately returning from the Mount of Olives to Jerusalem, then entered the Upper Room and devoted themselves to prayer (Acts 1:12-14). Saint Peter, the first Disciple standing behind the Angel in the group on the observer’s right, portrayed with his customary full head of white hair and beard, is included according to the text of Acts. Saint Paul, the first Disciple shown standing behind the Angel on the observer’s left, rendered with his established portrait-type of bald head and longer dark beard, is present, although not recorded in the scriptural account. He is included as the counterpart to Saint Peter, as the heads of the Apostolic group. Their presence, along with that of the Virgin, are visual references to the fullness of the Church, testifying to the significance of the event of the Ascension in the history of the Church, and as a major feast-day and festal icon in the liturgical life of the Orthodox Church. 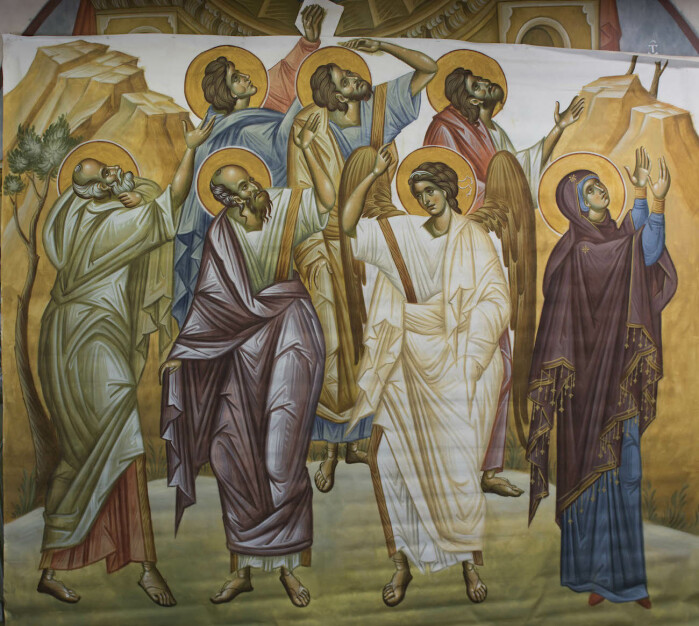 Scholars have shown that the earliest forms of the Ascension were modeled upon images of imperial apotheosis, in which Christ is depicted in a three-quarter position striding upward and taking hold of the Hand of God (Manus Dei). By the 6th century, however, the scene took on the form that is essentially the same as is found throughout the Byzantine, post-Byzantine and modern periods - a centralized, ascending figure of Christ, encircled in divine light and flanked by Angles while the Mother of God and Disciples look on from below.

Due to the scene’s centralized layout and the theme of ascending to Heaven, at times, the image of the Ascension was ideally placed with a church’s dome. Such is the case of the 9th-century mosaic in the church of Hagia Sophia in Thessalonike. By the mid-11th century and onwards, however, it became customary to place the image in the vault of the sanctuary. In the Shrine of Saint Nicholas, the image of the Ascension will be placed in the highest vaulted area of the east wall of the sanctuary, above the image of the Virgin and Child in the apse. The image of the Ascension is appropriate for the sanctuary space, for it has a eucharistic context. Christ’s human flesh remains with Him after the Resurrection and is taken to Heaven, the Flesh that is present in the Sacrament of Holy Communion, celebrated below on the Holy Altar. It is Christ’s Flesh and Blood that we partake of in the sacrament of Holy Communion, the sacrament that sanctifies us so that we, too, may ascend and enter the Heavenly Kingdom after our death and resurrection into eternal life. One further iconographic detail in this Ascension icon is worth noting. In the arms of Christ’s cruciform nimbus is the Greek inscription ὁ ὤν (ho Ōn): “I AM that I AM, or “The One Who IS,” (YHWH, in Hebrew). This is the name that God identified Himself by when speaking to Moses from the Burning Bush on Mount Horeb (Exodus 3:14). This text began to appear within the nimbus of the Lord’s image during the late Byzantine period and continued into the post-Byzantine and modern periods. Scholars have shown that originally the inscription was related to the Hesychast teachings of the 14th-century that focused upon the Divine Name of God and His uncreated light. However, in the post-Byzantine period and later, the inscription was understood more as the fulfillment of God’s promise to Moses at the Burning Bush. Now, through the Incarnation, God has revealed His face through the flesh of His Incarnate Son. The Son, the Second Person of the Godhead, has sanctified human flesh by assuming it for Himself and now in the Ascension, He reveals not only His return to the Father, but also the ultimate goal of humanity - that humanity is to be sanctified and also raised up to Heaven to dwell with Him in eternity as well. 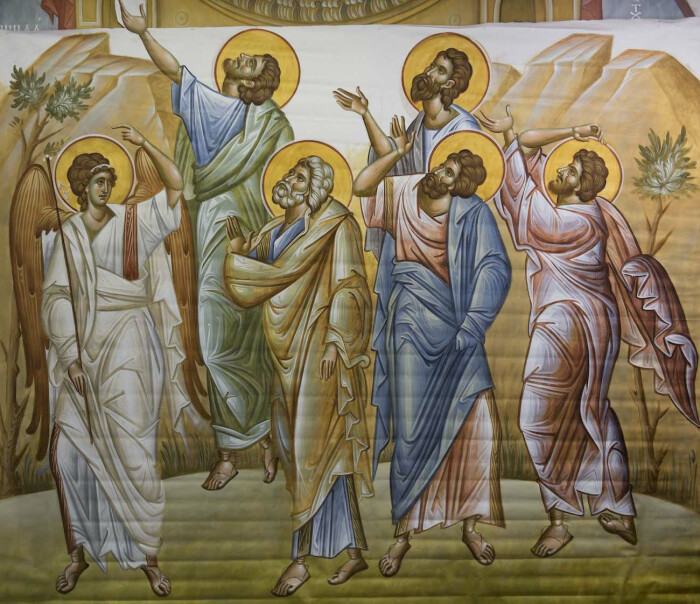