Iconography: Nativity Images in the Shrine of Saint Nicholas

NATIVITY IMAGES IN THE SHRINE OF SAINT NICHOLAS 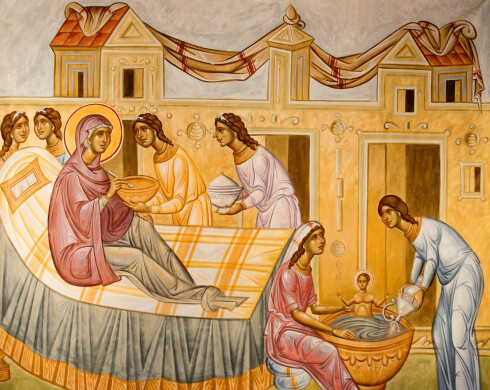 As outlined in previous Newsletters, Byzantine/Orthodox churches customarily were provided with a number of images referred to as the Christological cycle, that is a cycle of images depicting scenes from the life of Christ and/or the Theotokos.  Often these scenes were the same events corresponding to the 12 major feasts of the liturgical year, thus linking the sacred images with liturgical celebrations of special feast-days and also to the Eucharist’s commemorative aspect of the entire saving events of the life of Christ.  In addition, Byzantine/Orthodox churches that were dedicated to a particular saint often included depictions of scenes from the life of that saint, referred to as the saint’s Vita or Life cycle or Hagiographic cycle. This tradition is also observed in the Shrine of Saint Nicholas at Ground Zero and both of these cycles have a Nativity image.

Nativity of Christ:
The image of the Nativity of Christ, which will be placed in the upper arched zone of the south wall of the Shrine, follows the traditional Byzantine representation that drew upon the Gospels of Matthew and Luke, other early Christian texts and pilgrimage art originating from the Holy Land. The image of Christ’s Birth was essentially formulated as early as the 6th century and was eventually standardized by the 9th century.

At the center of the scene are found the reclining Theotokos with the swaddled Christ Child in a masonry manger in a cave, referencing the block-altar and cave-setting of the Bethlehem basilica that marked the traditional site of Christ’s birth. The swaddling cloths also refer to Christ’s burial in the tomb/cave of the Anastasis, while the stone manger recalls an altar, upon which Christ’s flesh is made present in every Divine Liturgy. Behind the manger one observes the ox and the ass –a reference to the prophecy of Isaiah I:3 (The ox knows his owner and the ass his master’s crib) while the star shines-again, fulfilling the Old Testament prophecy of Balaam (a star shall rise out of Jacob [Numbers 24:17]) and an allusion to the star of the Magi. Joseph, seated off to the left, is a witness to the miraculous birth and is placed at a distance from the Mother and Child, as a visual reference to the doctrine of the Virgin Birth of Christ. At the right is the detail of the bathing of the Infant by midwives, a detail drawing upon earlier classical scenes of the birth of gods and heroes, such as Dionysios and Alexander the Great. For the Byzantine image of the Nativity, this classical detail was Christianized and employed now to refer to the special divine and lordly nature of the newborn Christ Child.  The scene also includes the Annunciation to the Shepherds and the Adoration of the Magi, all of whom are liturgically commemorated on Christmas Day. 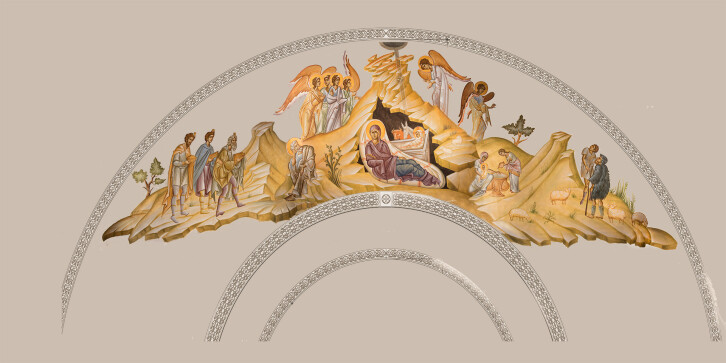 Nativity of Saint Nicholas:
Also on the south wall, but at the lower left, will be the image of the Birth of Saint Nicholas, the earliest surviving examples of which belong to the 12th century. In this image, one sees servants tending to the Saint’s pious mother, Nonna, following the birth of her child. At the right is found the bathing of the infant Saint Nicholas by the midwives just as in the image of the Nativity of Christ. Here, however, the newborn Saint is depicted standing upright on his own. This iconographic detail is found in most depictions of the Birth of Saint Nicholas and is based on the hagiographic text of his Vita or Life which recounts how during his first bath, he miraculously was able to stand up on his own, testifying to the child’s exceptional character and sanctity.

This spatial arrangement of the two Nativity scenes respects the traditional visual hierarchy of Byzantine/Orthodox interiors whereby the Christological cycle is found higher up in the vaults and upper zones of the walls while the images of saints are found below, closer to the space of the worshippers, and acting as intercessors on behalf of the faithful. It is fitting and appropriate to have the two Nativity images in relation to one another since all saints model themselves on Christ and their holiness and miraculous powers have their origin in Christ Himself.