In past issues of the Newsletter, the significance of including images from the Life Cycle (Vita) within the iconographic program of the Shrine of Saint Nicholas was highlighted. In addition to being the Patron Saint of the Shrine, Saint Nicholas is recognized as one of our most popular saints, venerated for his great intercessory powers. He is especially remembered as a holy hierarch who rescues innocent individuals from dangers and acts as a great intercessor at tribunals for those wrongly condemned. With respect to this latter aspect, scholars have shown that the Saint is particularly regarded as a most powerful advocate for the dead at the Last Judgment. For this reason, various sacred depictions from his Life were painted as cycles in numerous churches across the Byzantine/Orthodox commonwealth, often placed in spaces where intercessory prayers for the dead were conducted. Given the particular history of Ground Zero and the traumatic events of 9/11 when thousands of innocent people lost their lives, it is most appropriate, therefore, to have scenes from the Life Cycle of Saint Nicholas in prominent positions within the Shrine. 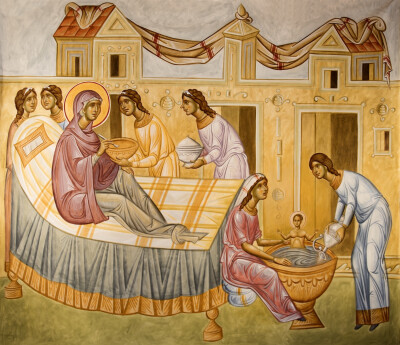 The Birth of Saint Nicholas:
This image was presented and described last December but is incorporated again here briefly to present the Life Cycle of the Shrine in its entirety. This scene is found on the south wall of the nave, at the lower left, and below the image of the Nativity of Christ. In this image, one observes servants tending to the Saint’s pious mother, Nonna, following the birth of her child. At the right is the bathing of the infant Saint Nicholas by the midwives, just as in the image of the Nativity of Christ. Here, however, the newborn Saint is depicted standing upright on his own. This iconographic detail is found in most depictions of the Birth of Saint Nicholas and is based on the hagiographic text of his Vita or Life which recounts how during his first bath, he miraculously stood up on his own, testifying to the child’s exceptional character and sanctity. This depiction is based upon that found in the 14th-century church of Saint Demetrios- Markov Manastir, in what is now North Macedonia. 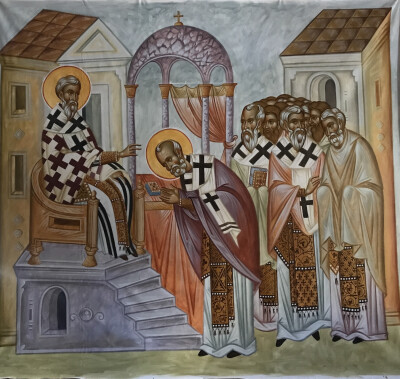 The Ordination of Saint Nicholas to the Episcopacy:
Due to limitations of space and for the sake of brevity, the scenes of Saint Nicholas’ ordinations to the diaconate and the priesthood, which appear in a number of the historical Cycles, have been omitted here. The depiction of his ordination to the episcopacy is placed on the lower right side of the south wall. Here, Saint Nicholas appears standing at the center of the scene, with his head bowed towards the presiding bishop, who is seated upon a raised podium and blesses the Saint as the new bishop of Myra, in the presence of two other bishops and clergy. The inclusion of the other hierarchs is in keeping with the liturgical requirements and rites of a hierarchical ordination in which at least three bishops are required to ordain a candidate to the episcopal office. In the image, Saint Nicholas and the other hierarchs all wear the cross-decorated omophorion, the insignia of the episcopal office. The omophorion derives its name from the Greek word omos (shoulder), indicating this piece of liturgical garb is worn “on the shoulder” (omophorion). It corresponds to the western liturgical garment of the pallium. Traditionally, the omophorion was made of wool, symbolizing the fleece of the lost sheep that Christ as the Good Shepherd (Luke 15:1-3 and John 10:1-21), raises on His shoulders, returning it to the flock. The omophorion, as symbol and metaphor, links any bishop to Christ, as a good shepherd caring for his flock of the faithful. Behind the Saint is the altar table, with the Gospel Book, surmounted by a marble ciborium (canopy), a common liturgical furnishing of Byzantine sanctuaries. In his Commentary on the Divine Liturgy (Historia Ecclesiastica), Saint Germanos, the 8th-century Patriarch of Constantinople, wrote that the ciborium symbolizes the holy place where Christ was crucified, buried, and resurrected and at the same time it refers to the Ark of the Covenant and Holy of Holies of the Old Testament Temple (Exodus 25). These architectural details signify that the ordination occurs within the sanctuary of the church. The scene here is based upon that found in the fresco cycle of the Life of Saint Nicholas in the 14th-century church of Saint Nicholas Orphanos in Thessalonike. 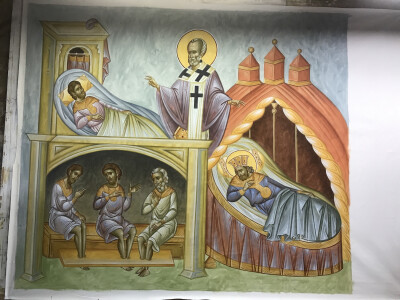 Saint Nicholas Appears to the Eparch Ablabios & to Saint Constantine the Emperor:
This scene, located on the lower left side of the west wall conflates two related events from the Life of the Saint. To the left, three generals are shown imprisoned in Constantinople. Their feet are bound in stocks. These three generals were loyal supporters of the Emperor and had put down a revolt in Phrygia. When triumphantly returning to the Capital, envious men slandered and falsely denounced them to the eparch of the City, Ablabios, who then convinced Emperor Constantine to imprison them as traitors and to be executed. The three generals, in their distress, prayed to Saint Nicholas. Above them, Saint Nicholas is shown appearing before Ablabios at night while he had been sleeping and orders the release of the generals. To the right, Saint Nicholas is seen also appearing during the same night to Saint Constantine and again orders the release of the innocent generals. The emperor’s chamber here is an elaborate canopy, crowned by three turrets. This conflated representation draws upon the 14th-century examples found in the churches of Saint Nicholas Orphanos in Thessalonike and that of Saint Nicholas in Ramaća, Serbia. 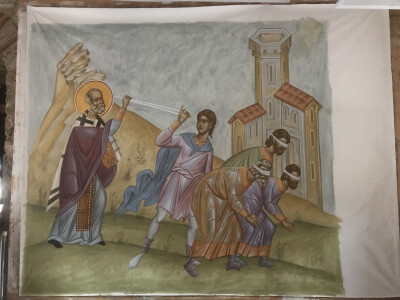 Saint Nicholas Rescues Three Innocent Men from Execution:
This depiction is placed on the lower right side of the west wall of the nave. The image depicts the event in which Saint Nicholas was informed that three innocent men were about to be executed by beheading at Myra. The execution was to take place just outside the city walls, as indicated by the representation of the city in the background at the right. Upon the Saint’s’ arrival to the site, he found the three men blindfolded and bound for execution and the executioner about to behead them. The Saint then grabbed the sword and thwarted the execution. The scene in the Shrine is based upon that found in the 14th-century Saint Nicholas cycle of the church of Saint George, in Staro Nagoričino, North Macedonia. 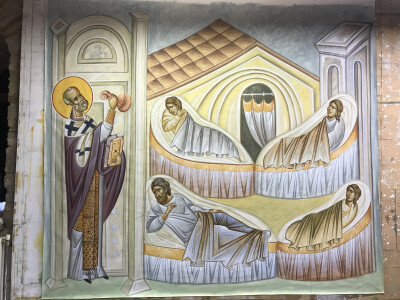 Saint Nicholas Provides the Dowry for Three Maidens:
The depiction of this episode from the Life of Saint Nicholas is located on the lower left of the north wall of the nave. This is probably the most well-known of the Saint’s salutary interventions, associating him with gift-giving and the Christmas season. According to the various texts of the Vita, a certain poor man in Myra could not support or provide doweries for his three daughters and, therefore, he was going to hire them out for prostitution. Saint Nicholas learned of this and one night came secretly to the house and threw a bag of gold coins through the window. The next day the father found the gold and was able to provide for the marriage of one of the daughters. The Saint came secretly a second night and provided another gift of gold and the father subsequently arranged for the second daughter’s marriage. On the third night, when Saint Nicholas came to give the gold for the third daughter’s dowry, the father remained awake to learn who the benefactor was. When the Saint threw in the third bag of gold, the father ran outside and discovered Saint Nicholas and offered his thanks. The Saint ordered the man not to speak of this to anyone so that his great act of charity would remain anonymous. In this image, the Saint is shown about to throw a bag of gold through the window while the father and three daughters are asleep within the house. This representation is adapted from that found in the 14th-century Cycle of Saint Nicholas in the church of Saint Nicholas Orphanos in Thessalonike. 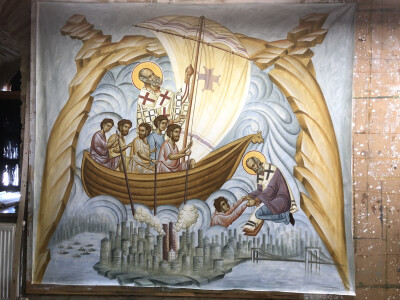 The Sea Miracle:
This scene is found on the lower right side of the north wall of the nave. In the Vita or Life of Saint Nicholas there are several accounts recorded associating the Saint with various miracles occurring at sea. For this reason he has been regarded as the patron Saint of sailors in particular, and all travelers in general. Among the surviving Byzantine painted examples of the Life, it is often difficult to determine which maritime episode is presented. At times, there are examples of conflated episodes within one visual rendering.

Our scene in the Shrine presents elements from several maritime episodes involving the Saint calming storms and rescuing sea travelers. It incorporates details that closely follow those found in the 14th-century churches of Saint Nicholas Orphanos in Thessalonike and that of the church of the Ascension in Dečani, Kosovo. Here, however, the Shrine’s image, has been adapted to the site-specific, historical, traumatic events of 9/11: the danger of the storm and the turbulent waves are metaphors for the horrific attacks on the Twin Towers of Manhattan’s World Trade Center. One can discern the skyline of Manhattan, the struck, burning Twin Towers billowing forth smoke, while below them is visible the white structure of the original Saint Nicholas church on Cedar Street, before its destruction in the wake of the collapse of the south Tower. Off to the left, are the flotilla of rescue boats crossing the Hudson River from New Jersey that heroically evacuated 500,000 people away from Ground Zero. Here, the Saint’s traditional intercessory role of rescuing those who are in danger is linked to the historic, tragic events of 9/11: saving the lives of thousands and interceding for the souls of those who lost their lives on that horrific day. 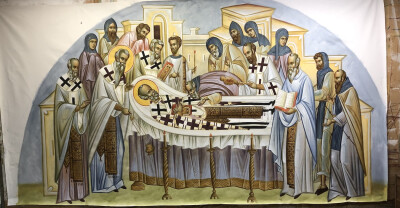 The Significance of the Shrine’s Cycle:
Our abbreviated pictorial Cycle of the Life of Saint Nicholas begins and ends, naturally, with scenes of the holy hierarch’s birth and dormition. The moment of his episcopal ordination is included since it is through this sacred office he is endowed with spiritual authority and sanctity which enable him to carry out his pastoral responsibilities as a most humble, faithful, dedicated, and loving shepherd towards his flock. The remaining chosen scenes were selected for their visual emphasis on the Saint’s role as a sure rescuer of the innocent in times of danger and as a most powerful intercessor. When the faithful and visitors gaze upon the sacred images, they will immediately encounter and be reminded of the Saint’s heroic deeds and at the same time receive great spiritual comfort in knowing that this holy hierarch rescued many from danger on the terrible day of 9/11, while he continuously intercedes not only on behalf of those who lost their lives that day but for all of us as we await the awesome day of the Last Judgment.