Iconography: Bishop Joachim of Amissos, A Portrait of the Renown Byzantine Art Expert 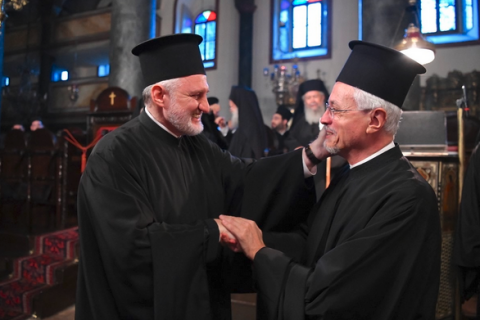 In the May edition of this Newsletter, we shared with you a little of the details of Father Loukas, the iconographer whose prayerful and Spirit-filled work will adorn the Saint Nicholas National Shrine. He is a well known figure, particularly to Father Alexander Karloutsos, who urged that this remarkable monastic be commissioned to paint the icons for Saint Nicholas prior to the election of Archbishop Elpidophoros.

Nevertheless, the program that Father Loukas was asked to execute was at best, underdeveloped and in some cases, incomplete. His Eminence Archbishop Elpidophoros, together with the Friends of St. Nicholas (FoSN), asked the newly-elected Bishop of Amissos, His Grace Joachim (Cotsonis), an internationally recognized scholar of the traditions of Byzantine Art, to review the interior spaces, and submit his recommendations. The Archbishop had been following the Bishop’s academic career for many years, since they first met at Holy Cross Seminary in 2004, when the Archbishop, then a member of the Patriarchal Court, came to our Seminary to teach for a semester.

As the Archbishop advanced in responsibilities, including Chief Secretary of the Holy and Sacred Synod, Metropolitan of Proussa, Dean of the Theological School of Halki, and a professorship at the Theological School of the University of Thessaloniki, he continued to regard the work of (then) Archimandrite Joachim, who has served as the Director of the Archbishop Iakovos Library at the Seminary since 1997. But Bishop Joachim is not just a librarian – by no means. For forty years, he has pursued a globally known career as an esteemed academic, following in the footsteps of the late Professor Nikolaos Oikonomides of the University of Athens, one of the world’s foremost experts in the largest record of Byzantine images, Byzantine lead seals, the study known as sigillography. Prof. Oikonomides was also the Advisor for Sigillograpy at the world renown Dumbarton Oaks, Harvard University’s Center for Byzantine Studies in Washington, DC. Bishop Joachim’s dissertation advisor for Byzantine Art History was the distinguished and eminent Prof. Anthony Cutler of The Pennsylvania State University.

In recognition of his academic achievements and a life of dedicated service to the Church, Archbishop Elpidophoros submitted his name to His All Holiness Ecumenical Patriarch Bartholomew, for election by the Holy and Sacred Synod to become the titular Bishop of Amissos, and the first Assistant Bishop selected by His Eminence Elpidophoros for his Archiepiscopacy of America.

Bishop Joachim’s ordination was on December 22, 2019, and within eight months of his ordination, when construction on the Saint Nicholas Shrine resumed after over two and one half years of suspension, Archbishop Elpidophoros asked Bishop Joachim to review the status of the interior and make recommendations.

A more suited expert could not have been found. For decades, Bishop Joachim had been sought out by informed priests and laymen alike for consultation and presentations to parishes around the country. Prior to his appointment for the Saint Nicholas National Shrine, Bishop Joachim spent years working with the Dormition Parish in Southampton, NY to effect an iconographic program worthy of the new Temple.

Bishop Joachim’s academic credentials are too numerous to list here, but they may be found on our Seminary website at:  https://www.hchc.edu/wp-content/uploads/2018/08/CotsonisCV23Nov2020.pdf.

Most impressive is the list of publications in which his scholarly work has appeared, a veritable “Who’s Who” of the world academic press.

His Grace grew up from early childhood at the Sophia Cathedral in Washington, DC, where the Church’s mosaic program was guided by experts from Dumbarton Oaks. Now, as a scholar who has been published by Dumbarton Oaks and as a frequent consultant and lecturer to this incredible institution, Bishop Joachim himself is the expert for the Saint Nicholas National Shrine.

A quiet and humble cleric and scholar, the Bishop was invited by Archbishop Elpidophoros to review the plans for the interior of the Shrine. Immediately, the Bishop saw in the design of Santiago Calatrava, who took his inspiration from Hagia Sophia, a connection that had gone unnoticed during the previous planning of the Shrine. On the eastern portion of Hagia Sophia there had been a “Refuge” Chapel dedicated to Saint Nicholas, a place that manifested his special role as an advocate for both the living and the dead. This important connection inspired Bishop Joachim to advocate for a new vision of the interior. One that was liturgically coherent, related to 9/11, and accentuated Saint Nicholas through a new “Vita” (Life) cycle of the Saint.

Working at the direction and with the express blessing of Archbishop Elpidophoros, in less than forty days, Bishop Joachim presented to His Eminence and to the Friends of St. Nicholas a new and integrated program for the Shrine. The plan was enthusiastically embraced by all. Communicating directly with Father Loukas, who now had a real partner who understood how to weave together the tradition of the Church within the limited space of the Shrine, the iconography was repurposed, repositioned, and begun afresh. The results will be an aesthetic program that is taken from the depths of the Orthodox tradition, but is also deeply connected to the events of 9/11 and the mission of the Shrine in the context of the rebuilt World Trade Center.

The visual experience in the Narthex, the Nave, and the Sanctuary, will now be a coherent narrative that memorializes those who were taken from us on 9/11, with special reference to Saint Nicholas (whose name means “Victory of the People”). In addition, Bishop Joachim will be writing a catalogue of all the iconography of the Church that will be available in the future, as well as designing the Museum of artifacts and sacred remains from the original Church that somehow survived, and which will be housed on the Second Floor of the Shrine above the Narthex. Of note, Bishop Joachim has written for major Byzantine Exhibitions; e.g., Byzantium: Faith and Power (1261‐ 1557), The Metropolitan Museum of Art, New York, New York, 2004. He has also curated museum exhibitions; e.g., Kontoglou: The Return of the Byzantine Icon, Hellenic College/Holy Cross Greek Orthodox School Theology, 4 October 2010‐5 November 2010, and Byzantine Figural Processional Crosses, Dumbarton Oaks, Harvard Center for Byzantine Studies, 23 September 1994 ‐ 29 January 1995. His academic experience, coupled with unique insights from his own field over forty years, make him the perfect custodian of the iconographic tradition of the Saint Nicholas Shrine.