When Santiago Calatrava – the world-famous architect – heard that there was a pre-qualified competition to design the re-imagine Saint Nicholas Greek Orthodox Church at the World Trade Center (WTC), he was on vacation, sailing in the Aegean. Immediately, he ended that journey to commence another one.

He was already familiar with the site – known colloquially as “Ground Zero,” because he had designed the WTC Transportation Hub for the rebuilt WTC, connecting regional trains to subway and other local transportation (also including abundant retail space). The eye or  “oculus” of the Hub, made of glass and steel, is oval-shaped, and is 115 feet long and 95 feet high. According to Calatrava, it resembles “a bird flying from the hands of a child.” 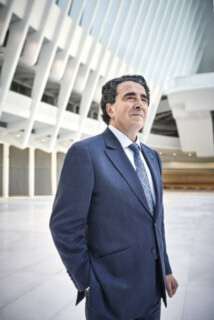 But for the soaring physical project, which is a dominant landmark at the current WTC, he felt a deep spiritual desire and need to be part of the holy space that was to be resurrected – the Saint Nicholas Greek Orthodox Church which had been destroyed when the South Tower fell to its ruin, and the destruction of so many precious human lives. He had never built a Church structure before, but he was determined that he would design this one.

By coincidence, the architect of the new Saint Nicholas Church at Ground Zero, was in Athens on September 11, 2001. As he reflected years later, when he coined the name for the Shrine, “The Parthenon of Orthodoxy”:

“Early that afternoon, I was confronted by the images broadcast out of New York. Horrified by the magnitude of the tragedy, I sat transfixed, unable to move until well into the night. Days later, as I walked through the Plaka - the ancient quarter in Athens - the walls of the Acropolis recalled the previous days’ images. The first Acropolis was destroyed in the 5th century BC when Athens was invaded and burnt to the ground. Athens and its Acropolis were rebuilt. The relicts of the original structures were collected and carefully entombed. The columns of the original Parthenon were saved, and reused to buttress the walls of the new Acropolis. To me, these columns link the tragedy and triumph of ancient Athens,  and testify to man's innate capacity to overcome such events…. The reconstruction of the Acropolis marked the beginning of the golden age of Greek civilization. Not only did Art, Philosophy, and Poetry flourish, but Democracy, as we know it today, was born. May the reconstruction of Ground Zero encourage us, and our children to such noble achievements.”

When he first approached the Archdiocese, to be included in the exclusive list of design architects under consideration, his reverence for the Church and the Clergy was palpable. He delivered to huge sketchbooks portraying (with his acute artist’s eye) his inspiration and concepts for what was to be the Saint Nicholas National Shrine. His persistence and insistence were rewarded, and as we showed in last month’s portrait of John and Mary Pappajohn, it was John’s vast aesthetic experience that led the Committee to its determination that Santiago Calatrava was the only architect for this historic project.

After receiving the commission, Santiago reflected on the challenge in 2012, on the anniversary of 9/11:

The St. Nicholas Greek Orthodox Church is to be rebuilt in the same block of the former Church that was destroyed during the September 11th Attacks. That Church had sat in the shadows of the World Trade Center on a site it had occupied since 1916. A former small tavern, the Church was always an interesting counterpoint to the skyscrapers that grew up around it. Despite many substantial offers to sell the property, the Greek community elected to maintain the Church on the site. It was a tiny spiritual refuge set among towering and wealthy neighbors, a restful walk among the mountains. It was no surprise that despite the horrific events of 9/11, the Greek Orthodox Church felt a duty and a strong emotional obligation to rebuild a church on the site. Like its forebear, the new Church is to be a tiny jewel in Lower Manhattan. A human-scaled presence in an ensemble of giants.

A classic problem of downtown Manhattan is simply one of size. To perceive the archetypal New York skyline, one is forced to leave the island and view it from afar. New York City does not have the plethora of smaller scale buildings that define other great cities like London or Florence, which are dominated by Church spires. In Manhattan the opposite exists. One must be small to stand out, and the new St. Nicholas Church achieves this humanizing of Lower Manhattan.

The new Church is principally based around a central Cupola. This is purposefully different from the rectilinear lines of the former Church. Indeed, it hearkens back to both the Greek classical Architecture of the Acropolis and to the Byzantine Architecture of the Hagia Sophia. The new Saint Nicholas will stand as both a Parthenon and Hagia Sophia for the Greek Orthodox Community. It will be a symbol of the resilience of New York City and the American spirit. Truly, Saint Nicholas will be a monument of the human spirit, pointing to the divine within us all.

What Santiago understood was the absolute necessity for adherence to the Orthodox, Byzantine Tradition, but also the context of the Church, among the mountains of glass and steel. His decision for marble, and not just any marble, but stone cut from the vein that fed the Parthenon, and then infused with glass and illumination that would give the signature glow to the Church that is now revealed night after night, was nothing but inspired genius.

Señor Calatrava has continued to assist the Church and The Friends of St. Nicholas, working closely with the Archbishop, Fr. Alex Karloutsos, Bishop Joachim and Father Loukas on all manner of design considerations.

He is truly, a Hero of Saint Nicholas!