Michael Jaharis is one of the most well-known names in the Greek-American Community, not only for his amazing business and financial success, his remarkable philanthropy, but for his commitment to the success of Greek Orthodox Church of America. The son of Greek immigrants from the Island of Lesvos – an island to which he gave significant philanthropic assistance – he grew up in the Greek community of the Chicagoland area, and after serving in the Armed Forces during the Korean War, he began his long and distinguished career n the pharmaceutical business.

In 1986, with his wife Mary, they founded the Jaharis Family Foundation, Inc. He was member of several non-profit and education boards: Trustee Emeritus of Tufts University, Chairman of the Board of Overseers for Tufts School of Medicine, Columbia University Medical Center Board of Visitors, and Member of the Board of Overseers of the Weill Cornell Medical College and Graduate School of Medical Sciences. He and his wife were Benefactors of the Metropolitan Museum of Art, the Art Institute of Chicago, and the Metropolitan Opera. They were Scholarship Sponsors of DePaul University College of Law in Chicago and developed the Mary and Michael Jaharis Center for Health Law at DePaul University. At Tufts University School of Medicine, they endowed the Jaharis Family Center for Biomedical and Nutrition Sciences, the Jaharis Family Chair in Family Medicine, the MJ Anatomy Lab, and multiple Scholarship Funds. They are also Benefactors of Northwestern University and the School of the Art Institute of Chicago.

Proud of his Greek ancestry and Greek Orthodox faith, Michael served as Vice Chairman of the Greek Orthodox Archdiocesan Council from 1999 to his passing in 2016. He was a Founding Member of the FAITH Endowment and a Founding Member and Executive Committee Member of Leadership 100. Her was also made “Archon Exarchos of the Order of St. Andrew the Apostle,” of the Ecumenical Patriarchate of Constantinople. Mary and Michael were also Benefactors of Hellenic College Holy Cross, where they supported the establishment of the Archbishop Demetrios Chair for Biblical Studies and Christian Origins as well as the Mary Jaharis Center for Byzantine Art and Culture and they also established the Archbishop Demetrios Chair for Greek Orthodox Studies at Fordham University. When Greece was in tremendous economic hardship Michael and Mary directed their philanthropic efforts to supporting humanitarian initiatives to provide food, medical care and education to children and elderly living in Greece during the ongoing financial crisis and to support the refugee families fleeing to Lesvos, Greece as well as providing humanitarian aid after multiple devastating forest fires.

But in addition to this rich and complex life of business and philanthropy and even the affairs of the Church, Michael was passionate about the rebuilding of Saint Nicholas at Ground Zero as a National Shrine. In fact, he supported the idea for Saint Nicholas to be a National Shrine long before it became the reality it is today. In the years leading up to the rebuilding, Michael was instrumental in bringing about the solutions that led to the exchange of land with the Port Authority of New York and New Jersey that resulted in the current site at 130 Liberty Street. He was also perfectly aligned with his good friend John Pappajohn, in endorsing the design of Santiago Calatrava as the program for the rebuilt Church. 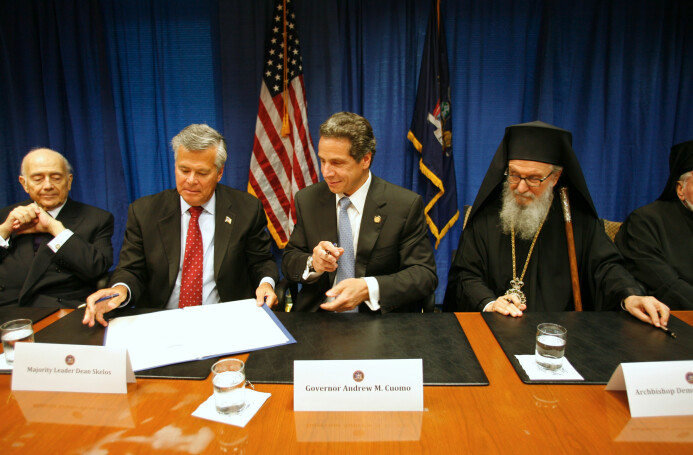 Michael was humble about his service to the Church, as evidenced by these photos on the day that the Archdiocese sealed the exchange of properties with the Port Authority, on October 14, 2011.

Michael Jaharis signed on behalf of the Greek Orthodox Archdiocese of America, and it was this historic agreement that paved the way for the construction of the Saint Nicholas Shrine to finally commence, thirteen years after the attacks of 9/11. 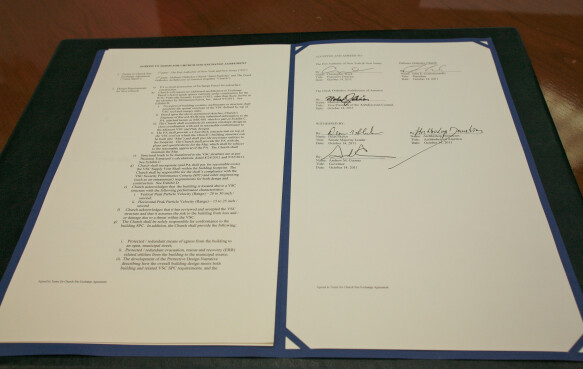 Michael always possessed the vision to see what the Shrine could become, and although he did not live long enough to see that vision come to life at the rebuilt World Trade Center, his and Mary’s generosity and far-reaching sight became one of the chief pillars, upon which the Saint Nicholas Greek Orthodox Church and National Shrine will forever stand.

Michael Jaharis is truly a Hero of Saint Nicholas. May his memory be eternal!