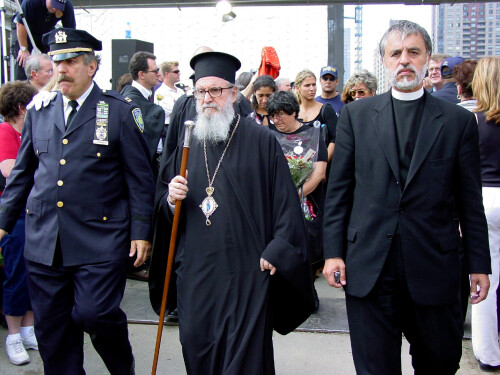 On the morning of September 11, 2001, John V. Kassimatis, Archon Depoutatos of the Ecumenical Patriarchate and a Lieutenant in the Port Authority Police was on duty at the Port Authority Bus Terminal in Midtown Manhattan. John is a well known figure in law enforcement in New York, and deeply committed to and involved with the Church. In the days, weeks and months after 9/11, he was instrumental in countless ways to facilitate the presence of the Archdiocese at Ground Zero, and in the recovery efforts of the few remaining objects of the Saint Nicholas Church on Cedar Street. Together with Fr. Alex Karloutsos (a Port Authority Chaplain), he facilitated the former Archbishop, His Eminence Demetrios, in returning to New York from Boston on 9/11, and enabling him to be present at Ground Zero in those first hours and days after the attack.

John is indeed, a true Hero of 9/11 and of Saint Nicholas.

Below, with John’s permission, we share his official report of that fateful day, which he submitted to the Chief of the Department, six months later, telling his story of September 11, 2001 (he had been promoted to Captain by then). This is the first time this has been shared publicly, and we thank him for allowing us to do so here. 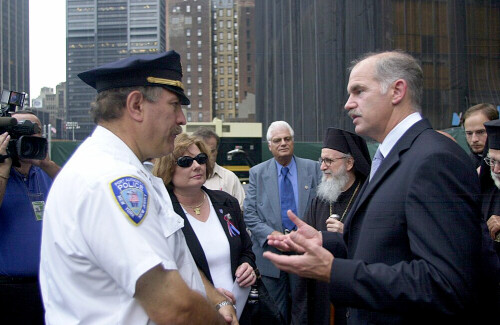 Please be advised: This report contains graphic details that some readers may find upsetting.

On September 11, 2001 I was on duty as the Executive Lieutenant at the PABT [Port Authority Bus Terminal] At approx. 0835 hours I was on the phone with the PA Law Dept. I was speaking with D. D__’s secretary about scheduling time during the day for arbitration the next day. When she screamed on the phone “Oh my god, it’s an earthquake, the building is swaying,” she screamed and the phone went dead.

As I always do I had a radio set on News Radio 88 AM and as soon as the phone went dead the radio announced that a plane had just struck the WTC.

I immediately went into Inspector F__ office and advised him of the same. I then responded to the desk and advised the desk sergeant to have all hands recall to the desk. I told the sho [station house officer] to to go to 9th Ave and to commandeer the first city bus he saw coming. Inspector F__ and I myself, Lt. M__. Sgt. P__, Sgt. Mc__, Sgt. F__, Sgt. R__ and approx. 20 Pos [police officers] responded to the WTC via city bus with [car] 5350 as an escort. While in route to the WTC we saw and heard the second plane hit tower 2.

We then saw the Mayor and PC responding down Barclay Street and we advised the that Vesey was dangerous with falling debris and bodies; they drove down Barclay to West.

Inspector F__ and I then responded to VIP Drive at 1 WTC and with the caution of a minefield we were able to enter the lobby through the broken windows. We reported to Chief W. H__ who was by the communications center.

We conferred with chief H__ and advised him that NYC OEM and the Mayor were looking for PAPD senior staff and he responded to 7 WTC.

We then conferred with Inspector N__, Captain W__, and Sergeant D__. We observed that on the Galleria level (Mezzanine) where staircases B&C were emptying out there was a bottleneck of people trying to get to the motor stairs to evacuate the Tower. Inspector F__ and myself responded to that location and supervised the evacuation at that point. People coming out of staircase C and walking towards the motor stairs would see the horrors on the plaza and against the glass walls, and they would go into shock and freeze, thus impeding the flow of persons exiting staircases B&C.

Many PA [Port Authority] personnel and volunteers assisted us; among them were E. B__, PO C___ TRB, and several Secret Service agents.

I cannot put a time line on how long we were there assisting and supervising the evacuation. People who were exiting staircase B advised us that Police on upper floors were requesting new Scott bottles [respiration cylinders]; we contacted Sgt. Mc__ who picked up bottles at the Police desk and was enroute to our location.

At this time, I was about 25 ft north of the motor stairs with my back to the plaza when I started to hear this roar that just became louder and louder and louder. I remember looking over my left shoulder and looking up at the Chandeliers and they began to shake and break apart. Then lots of debris started to rain on the plaza. I remember Inspector F__ yelling, “run for your lives.” I looked over my shoulder at the plaza as I started to run west towards the west side of the street of the Mezzanine level when it became pitch black, the loudest crashing sound I ever heard. I looked toward the motor stairs and saw people being picked up and slammed against the concrete wall; the glass wall behind me broke and crashed in followed by debris and steel and concrete.

My life flashed in front of me and I was preparing to meet my Maker. The force of the impact lifted me and I believe carried me to the north wall of the Tower One on that level, believing that I would be cut to ribbons by the debris filed behind me. My entire life ran through my head, waiting for what I though was my demise.

I found myself on the ground next to what I discovered was the glass north wall of Tower One. It was pitch black; I could not see; I could barely hear and my mouth was with filled with “sand.” I could not breathe. My left ankle and knee hurt a lot and my left shoulder. I felt something or someone on my back. I discovered it was TRB PO C__. I started to yell out for Inspector F__ yelling, “Larry, Larry,” And I could hear like it was way off in the distance someone calling “Kaz, Kaz.” F__ and I were able to join up and I asked PO C__ if he had a flashlight, which he did. (That light saved us all) He shined the light and we heard other voices; it turned out to be 2 Secret Service agents. We all thought another plane had hit the plaza. We decided to form a human chain by holding each other’s hands. This was done by feeling and shouting; we could not see each other. One of the agents shouted for the flashlight and it was passed up from C__ to me and to F__ and up to the first guy.

When we got to the lobby level with the flashlight we could see that the plaza had collapsed into the stores and path plaza area. On the other side of the revolving doors at that time we heard shouts of help form the debris next to the revolving doors. C__, myself and F__ went there and pulled out of the rubble 2 NYPD supervisors who later we learned were Capt P__ and his Lieutenant. They joined the rest of us. We discovered that there was only one way out that was through the local elevator lobby that was between the 2 sky lobby elevator shafts, so it was totally protected from debris crashing into the building from Tower 2 and the plaza.

We exited Tower One on to West Street; it looked like a gray snow blizzard. We all cleared out noses and mouths and tried to clear our eyes. We then scurried north on West Street; the gray snow was knee deep as I approached the end of VIP Drive. I encountered an unconscious female approx. 35 years old on the ground and bleeding. I wasn’t able to pick her up but I was able to drag her up West Street. When I got to the area under the foot bridge at Vesey Street, I heard that roar again. Next to us was an NYPD Suburban; running, I placed the woman in the back seat with the assistance of unknowns, and then jumped into the driver’s seat. The vehicle filled up quickly with people piling in and on to each other. I place the vehicle in gear and made it to the front of the Verizon building when the debris shock wave aught us and buried the vehicle. We sat in the vehicle and we could hear the debris piling up, most of it behind us. After a period of time it became quiet and the vehicle was still running. I put in in 4-wheel drive low and started to rock it into the debris field in front of us, and place it in reverse and do the same. I don’t remember how many times I did that, but then the front of the vehicle broke through the debris and we saw daylight, and we moved forward. I drove I believe two blocks north and the vehicle stopped. We all got out and I helped take the unconscious woman to a nearby ambulance.

A fireman with a hose line hosed me down and I had my eyes looked at by EMTs and oxygen was put on me for a while.

I then was able to move on, sprained ankle and shoulder, and I looked up Inspector F__ and M__ and PA Staff ad we went to Manhattan Comm College to establish a command post and base of operations. I remained there.

I am Honored and Privileged to have worked that day with over 200 Port Authority Police Officers who selflessly responded that day and I will always remember and honor the 37 who did not return.

I respectfully submit this report.