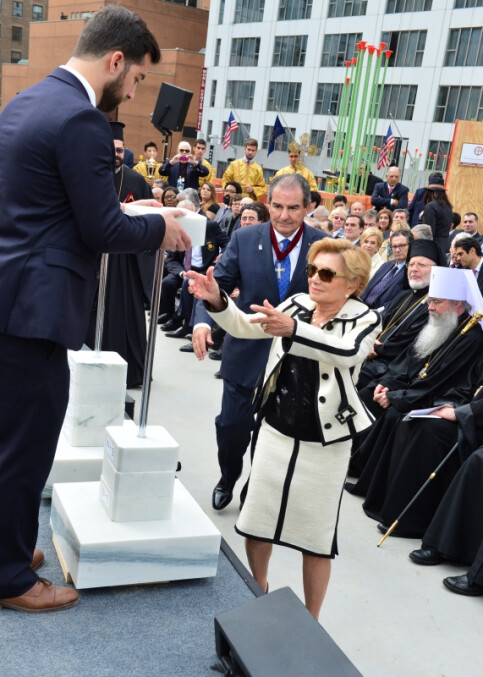 The son of a butcher and a seamstress, Peter Pappas Sr. was determined to make his own way in the world. After two years studying at NYU, Peter set aside his ambitions in professional accounting and joined many of his friends who were arriving back from the war to go into a promising new field: air conditioning. With no money, his hard-working parents taught him the value of diligence, and Peter eventually worked himself up to the role of Vice President in a local company. As a family man with three young children (Peter Jr., Jamie, and Tara), the future looked bright. In 1971, he hung up his tie, bought a green open rack truck, hired a secretary (his wife Cathy), and the pair acquired their first office (the dining room table). P.J. Mechanical (“P.J.”) was born. Cathy had grown up in the Saint Nicholas Church that was on Cedar Street, attending Greek School there as a little girl. They went on to have a wonderful family, three children, many grandchildren, and ana vivacious life in the Omogeneia and greater society that was marked by their deep involvement in the life of the Church, and their commitment to Hellenism and in particular the cause of Cyprus. The family has contributed two million dollars to the National Shrine project alone, not counting their generosity to the National Church and multiple parishes throughout the decades.

Peter Sr. served as Chairman of the Board of P.J.M. Holdings Group, the family owned and operated corporation - consisting of P.J. Mechanical Corp, Delta Sheet Metal Corporation, P.J. Mechanical Service & Maintenance Corp., P.J. Mechanical Building Services Corp. and Expert Insulation Corp. Since its inception, the company had become the largest HVAC contractor in the New York Metropolitan area and among one of the largest mechanical contracting firms in the northeastern United States.

Peter Sr. fell asleep in the Lord in 2017, but not before he had a tremendous impact on the Saint Nicholas National Shrine. In 2005, PJ Mechanical was selected to work on mechanical contracting for the new World Trade Center Project at Ground Zero, and 9/11 Memorial and Museum. The firm took great pride in, and were honored to complete those and other projects at the WTC site. Their decades of expertise and their intimate knowledge of the complexities of the WTC site led to an innovation conceived of by Peter Sr., that not only saved the Shrine hundreds of thousands of dollars, but more importantly, preserved the architectural integrity of the Shrine.

The issue was the mechanical system that would cool and heat the Church. The original plan located the equipment inside the Shrine itself, taking up valuable real estate and creating and issue of noise control. Given the self-contained nature of the Shrine, no one could see a way around it, except Peter.

Because of P.J. Mechanical’s involvement in the sixteen-acre WTC construction site, which included the literal millions of square feet of space beneath the surface, Peter looked for a solution to take the mechanical equipment out of the Shrine. He understood the beauty of the design and wanted to ensure that the jewel-box character of the Shrine was untouched by these practical and necessary efficiencies.

He worked with his sons and with his team to devise a plan, and when he arrived at it, went to the Archdiocese in 2012 to give the good news. Unfortunately, no one seemed willing to listen! Peter, a well-known Greek Orthodox of stellar profession reputation came up against a bureaucratic nightmare that he could hardly believe. Finally, with the help of Fr. Alex Karloutsos, he secured a meeting with the Port Authority officials to show them something that no one had imagined – a way to supply the Shrine without any equipment inside it.

The genius of his solution was that it depended on knowledge that was virtually inaccessible to everyone else: the knowledge of how the system of piping and valves in that Eleven Million Square Feet of space beneath ground worked. He knew it, and he understood how it could be leveraged for the Shrine because P.J. Mechanical had built it!

He found an access point that was accessible, even though it was one thousand feet away from the Shrine. He convinced his subcontractors to donate their services to install the piping and connect Saint Nicholas in such a way that cooling and heating would be provided without the detracting in any way from the interior or exterior of the Shrine. One thousand feet later, despite all the doubters, the Shrine’s HVAC needs were secured without cost to the Church!

This ingenious solution saved the Shrine hundreds of thousands of dollars, but more than that, it saved the Shrine the eternal cost of alterations to its façade and taking up invaluable space within the structure, not to mention the noise mitigation issues.

Throughout his life and career, Peter’s absolute love for his family, his tireless support for the Greek Orthodox Church and his Greek and Cypriot heritage, and his dedication to advancing multiple charitable organizations and causes, were all premised on his Christian ethos of generous and exemplary philanthropy: “It is more blessed to give than to receive.” In fighting for what he knew was right for the construction of the Shrine, manifested his faith and love for the Church both with humility and with wisdom.

He and his Family are truly Heroes of Saint Nicholas. May his memory be eternal!