The Parish Council of the Saint Nicholas Church

As we approach the 20th Anniversary of 9/11, and the truly unspeakable tragedy of that day, we also take this moment to remember the good men and women of the little Church at 155 Cedar Street. They were a small community of Greek-American immigrants, who started the Church in lower Manhattan, even before they purchased the old home on Cedar Street. Before moving to Cedar Street, the parishioners worshiped in the dining room of a hotel on Morris Street run by Stamatis Kalamarides. In 1919, five families raised $25,000 to buy what was then a tavern at 155 Cedar Street, and converted it into a church. Regular worship commenced in 1922.

The original Saint Nicholas was only 22 feet wide, 56 feet long, and 35 feet tall. You can only imagine how it felt when the Twin Towers were completed in 1972 and 1973. In the years around the construction of the World Trade Center, the old neighborhood around Saint Nicholas gradually disappeared. It had been an immigrant neighborhood of Lebanese, Greek and Syrian immigrants, filled with small businesses and produce stands.

The adjacent buildings were demolished, and a parking lot owned by Milstein Brothers Real Estate surrounded the Church surrounded on three sides. 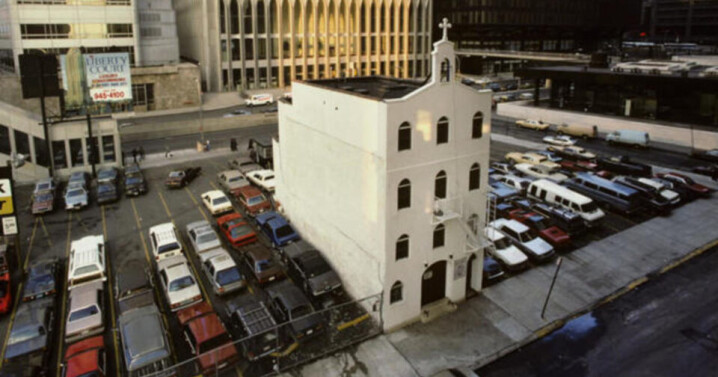 The pressure on the Church to sell out, like all the other properties had done, was intense, During this time, the Parish Council, led by the late James T. Maniatis (who served in that position for 33 years), was made repeated offers worth millions of dollars to sell the Church.

Fr. Alexander Karloutsos, who was then a young priest serving the ever-memorable Archbishop Iakovos, and who has been with the rebuilding of Saint Nicolas since the very evening of September 11, 2001, recalls what happened:

“Jim Maniatis and the Parish Council were called in to meet with Archbishop Iakovos. The Milstein group was intent on buying that last remaining sliver of land. I remember seeing Jim before he met with the Archbishop and I asked him what he was going to do. He told me that they could not sell the Church for any amount of money, because it was the Church of their parents and grandparents. They would not be pressured or bullied into selling. They were standing their ground no matter what.

“As I reflect on where we have now arrived, with the rebuilt and resurrected Saint Nicholas – a National Shrine of the Greek Orthodox People and a Shrine for our Nation of all Americans, and indeed the whole world – I cannot help but be deeply moved by the inner strength and faith of the Parish Council and the Parishioners of the little Church on Cedar Street.

“It’s almost like they knew in their bones the inestimable value of Saint Nicholas; that there was no price worth selling their spiritual home. And because of their fidelity, the new Saint Nicholas rising at Ground Zero, just yards away from the original location, will serve a purpose that no one could have ever imagined. I am privileged to have known Jim Maniatis and his fellow council members, and am so proud of their courage and faithfulness to say No to the world and Yes to God.”

Indeed, the Parish Council of Saint Nicholas stood their ground, and now on holy ground at Ground Zero, their persistence and resistance will redound to one of the most important spiritual centers in the United States: Saint Nicholas Greek Orthodox Church and National Shrine, a place of healing, remembrance, and light for all. Our gratitude to them will never fade!

They are truly heroes of Saint Nicholas!